Best Practices & Ideas To Get Started

Line 1: Proper names of those hosting
Line 2: Request
Line 3: List relationship of the bride to the host
Line 4: Bride’s first and middle names only
Line 5: Groom’s full name
Line 6: Groom’s parents full names
Line 7: Day of the week, day and month of wedding
Line 8: Time of wedding and time of day
Line 9: Name of the location of wedding
Line 10: City and state where wedding will take place
Line 11: Reception information

Source: A Guide to Wording Your Wedding Invitations Correctly

Step 1: Who is Hosting?
The first names your guests will see on your wedding invitation are those of the people who are paying for the event. Traditionally, this has been the bride’s parents, and so it reads:
Mr. and Mrs. Marvin Beazley or Kate and Marvin Beazley
If the bride and groom are hosting, then the line reads
Ms. Jane Doe and Mr. Sam Smith
or,
Together with their families,
Jane Doe and Sam Smith

Step 5: The Location
If the ceremony is at a well known location, you needn’t include the address:
The Museum of Fine Arts
Houston, Texas
but for smaller locations, or your home, you’d want to write out the address.
The Art Club
49 Marquis Road
Blair, California

Step 6: Time for the Reception
Let your guests know there is going to be a party afterward . This can either be included on the wedding invitation or on a separate reply card.
On the wedding invitation, it would read
Reception to follow at the Briar Hills Country Club
If you’re not serving a full meal, it is nice to let guests know. You might write:
And afterwards for cocktails and cake in the Rose Room.
Or
Dessert and dancing to follow
A separate reception card is often good to use if the ceremony and reception are in different places, or the reception doesn’t immediately follow the ceremony. It might read something like
Reception
8 o’clock
Parker Grand Hotel
342 Allen Road
Pike, Oregon

Step 8: Optional details
Optional details include telling your guests what to wear. Strictest etiquette tells you not to include information about attire on your invitation, but I think this is an outdated opinion. Guests appreciate clues about how to dress, and are not as instinctively knowledgeable as they used to be. To avoid someone showing up in blue jeans, include a line such as:
Black Tie
Other options: Semi-formal, cocktail attire, festive attire, creative black tie, white tie, black tie optional, dressy casual, informal. Definitions of these terms
Some couples who wish not to have children at the reception may write:
Adult reception
Which is more polite than writing No Children 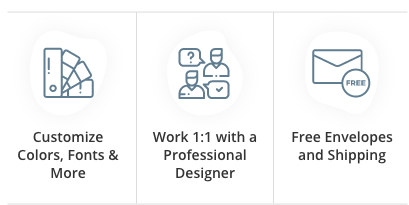 
"I loved working with The Invitation Maker. My invitations were exactly how I wanted them. They were so easy and flexible to work with since I was in Europe most of the time when we were designing them. It was also very affordable. Highly recommend them!"
Sharena M.

Loved The Invitation Maker they are able to make any announcement that you show them a picture of or like, such a great price, their designers are awesome and make sure that you are satisfied with your card. Would highly reccomend. They are also fast at replying to emails.
Addie I.

We are ready to help in any way we can. Feel free to reach out to us!